Another Successful Summer in Latvia!

The third year of the Pushkin Summer Institute-Abroad is in the books! Congratulations to our NSLI-Y scholars for a summer full of hard work, lots of fun, and lots of learning!

After five weeks of intensive Russian language studies, the sixth and final week of the program was highlighted by the students’ portfolio presentations: a polished product of their work in Russian language and culture over the course of the program. To cap off the academic program, students also performed a play, several songs, and a dance they learned during their stay in Daugavpils.

Outside of the classroom, students went on weekly excursions to sites of historical and cultural importance such as castles and churches. They also got to try their hand at a number of fun activities such as kendo, orienteering, and making pel’meni.

On the day before their departure, students went for one last walk in a Daugavpils park with their peer tutors. On the morning of Saturday, August 5, the group departed for Riga, for their flight home to the United States. The local peer tutors came to say one more round of good-byes; wonderful to see how many close friendships were formed after only six weeks! 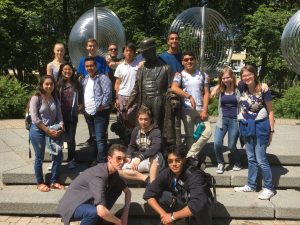 The Center for Russia, East Europe, and Central Asia (CREECA) and the Department of Slavic Languages and Literature at UW-Madison are pleased to announce the summer 2016 program leaders for the Pushkin Summer Institute-Abroad in Daugavpils, Latvia. Brian Kilgour will serve as Resident Director and Tiara Luckiesh will be the Assistant Resident Director leading a group of 15 high school participants on the six-week intensive Russian language program.

Brian Kilgour is a PhD candidate in the Department of German, Nordic, and Slavic at UW-Madison. He received a Master’s degree in Russian, East European, and Central Asian Studies from UW-Madison in 2016. As an undergraduate, Brian majored in Rusian and International Relations at Carleton College and also studied advanced Russian at Moscow State University. In 2011-12, he spent 10 months living in Ulan-Ude on a Fulbright Graduate Student Research Fellowship, where he studied cultural and historical narratives in tourism. Brian served as the Assistant Resident Director for the 2016 Pushkin Summer Institute and also worked as the project assistant for the program from January 2015 until June 2016.

Tiara Luckiesh is completing a bachelor’s degree in International Studies, Russian, and Spanish. She spent the 2016-17 academic year in Almaty, Kazakhstan as part of UW-Madison’s Russian Flagship Capstone program, and has also studied abroad in Vladimir, Russia. Tiara has prior experience as a resident assistant with students studying foreign languages as well as tutoring and mentoring students.

The Pushkin Summer Institute-Abroad is featured in the Center for Russia, East Europe, and Central Asia (CREECA) Fall 2016 Newsletter! Click here to read the article.

The Center for Russia, East Europe, and Central Asia (CREECA) and the Department of Slavic Languages and Literature at UW-Madison are pleased to announce the summer 2016 program leaders for the Pushkin Summer Institute-Abroad in Daugavpils, Latvia. Melissa Warner will serve as Resident Director and Brian Kilgour will be the Assistant Resident Director leading a group of 15 high school participants on the six-week intensive Russian language program.

Melissa Warner is a PhD candidate in the Department of Slavic Languages and Literature at UW-Madison. Melissa’s international experience includes intensive Russian study at Yaroslavl State Pedagogical University in 2010 and participation in a folk-song recording expedition to the Smolensk region in 2013. She is a three-time alumna of Middlebury College’s Summer Language School of Russian.

Melissa has been teaching first-year Russian at UW-Madison since 2013, including an intensive summer course in 2015. In 2015 she received a university-wide “Early Excellence in Teaching” award for graduate teaching assistants and was also recognized by her students as an “Honored Instructor” through the University Housing Academic Initiative.

Brian Kilgour is completing a master’s degree in Russian, East European, and Central Asian Studies at UW-Madison; in fall 2016 he will begin a PhD program in Slavic Languages and Literature. Brian majored in Russian and International Relations at Carleton College and also studied advanced Russian at Moscow State University. In 2011-12 he spent 10 months living in Ulan-Ude on a Fulbright Graduate Student Research Fellowship, where he studied cultural and historical narratives in tourism.

Since January 2015, Brian has been the project assistant for the Pushkin Summer Institute-Abroad, where his responsibilites included creating orientation materials, booking travel, and coordinating communication between Latvia, UW-Madison, and NSLI-Y. In addition to his interest in Russian, Brian was a collegiate swimmer and coached swimming at all levels for several years.

“Melissa and Brian will make a great team as program leaders,” notes CREECA associate director Jennifer Tishler. “They bring to this position a lot of experience working with young people, significant time spent living, working, and studying in Russia, and excellent Russian-language skills.” 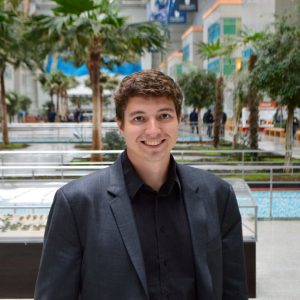 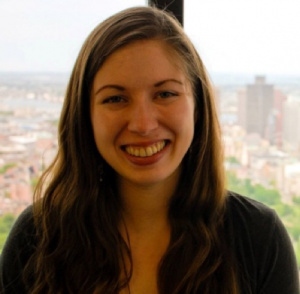 The Center for Russia, East Europe, and Central Asia (CREECA) and the Department of Slavic Languages and Literature at the University of Wisconsin-Madison have received a 2016 STARTALK award in the amount of $90,000 to support the Pushkin Summer Institute at UW-Madison. Please see the linked PDF for the full press release.

The Pushkin Summer Institute-Abroad was featured in an article by the Center for Russia, East Europe, and Central Asia. Read it here!

NSLI-Y students in Latvia celebrated their final week in Daugavpils by giving several performances of material they learned in class. Students visited the museum-home of the poet Rainis, Latvia’s Pushkin. Participants gathered there with their teachers, language partners, and host families to celebrate their time in Latvia with a slideshow, songs, a play performance, and Latvian food. Students also had the opportunity to perform in traditional Latvian costumes. Following the formal ceremony, students and their language partners sang songs and relaxed before their long trip back home. 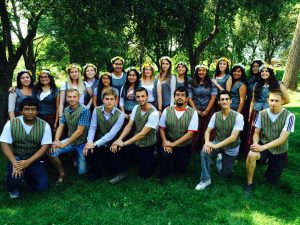 NSLI-Y students traveled to Ventspils to celebrate the city’s 725th birthday. Ventspils is a small coastal city situated on the Venta River and the Baltic Sea and is notable for its ice-free port, the busiest in the Baltic Region. While in Ventspils, NSLI-Y students spent most of their time on the Osta Street promenade, where they had the opportunity to sample traditional Latvian foods, buy a slew of local souvenirs, and listen to live musical performances, ranging from Latvian folk to contemporary alternative rock. In addition to the festivities, NLSLI-Y students had the opportunity to learn more about the city of Ventspils and its history. Students also stopped at Rundale Palace, one of two major palaces built for the Dukes of Courland. NSLI-Y students had a guided tour throughout the Palace, where they learned more about Rundale’s construction and history, while appreciating the majestic architecture and lavish décor. 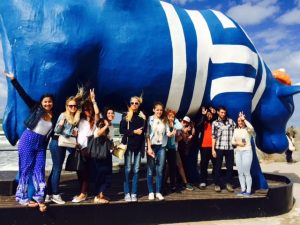 NSLI-Y participants made their last visit to the orphanage in Daugavpils that they have been volunteering at for the duration of the summer. The project for this trip was to paint a fence at the orphanage. NSLI-Y students were met immediately by a stream of children bearing half-bottles of green paint. Children claimed their American partners and made for the metal fence. After painting the fence, the group went back inside to play games and paint faces. Students have benefited from the opportunity to make friends at the orphanage and speak Russian with the children. During fence-painting, children were trying to get better acquainted with their NSLI-Y partners using Russian, and when getting their faces painted, the children were very specific about which colors had to go where. It was hard for the NSLI-Y students to say goodbye after several volunteering visits to the orphanage. 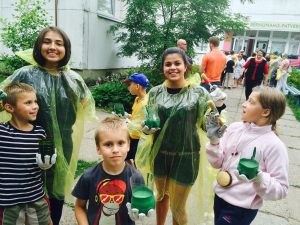 This week, NSLI-Y students had the opportunity to learn more about Latvia’s complex and tragic history by going on an excursion to a few of Daugavpils’ many war memorials. Participants visited the war memorials and cemeteries of both the Soviet and German soldiers who fought in World War II, the Warrior’s Cemetery of Latvian Army Soldiers Killed in Latvia Liberty Battles, the Memorials to the Victims of Fascism, and the Memorial for the Victims of the Holocaust. These visits to Daugavpils’ different memorial sites taught the group an invaluable lesson in Latvian history. While the students learned much of the same information in class, seeing the cemeteries in person provided insight and appreciation that cannot be gained in the classroom. 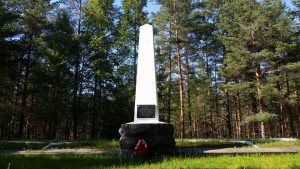 On Friday, NSLI-Y students visited the Dinaburg Fortress (also known as the Daugavpils Fortress), which lies on the banks of the Daugava River. Students enjoyed a walking tour around the main points of the Fortress, the only early 19th century military fortification of its kind in Northern Europe that has been preserved without significant alterations. The Fortress is also the site of the Mark Rothko Art Centre. Students participated in a wonderful tour of the museum, in which they learned more about Mark Rothko’s life, work, and legacy. Students began learning about the early life of the great abstract expressionist painter, while also learning about the thriving Russian-Jewish community that lived in early-1900s Daugavpils (then known as Dvinsk). The Rothko Room contains six original Rothko paintings, all of which were donated to the museum by his children, and the students had the incredible opportunity to appreciate the original work of one of the 20th century’s greatest artists. 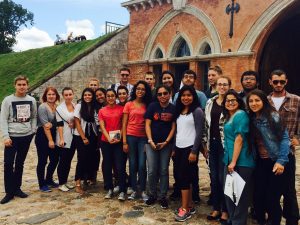 NSLI-Y students in Latvia traveled to Jurmala, where they had a chance to hang out on the beach and have some fun. Jurmala, about a 25-minute bus ride north of Riga, is one of the former Soviet Union’s most popular and well-known beach towns. Located on the calm shores of the Baltic Sea, Jurmala attracts hordes of tourists every summer. After some long, stressful days in the classroom, the students were ecstatic to play beach volleyball and walk down the town’s quaint pedestrian thoroughfares. 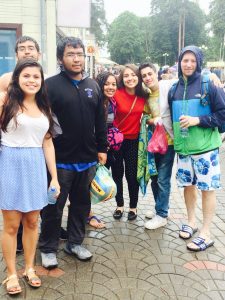 Last week, NSLI-Y participants in Latvia visited the Preili Museum of Dolls. The Museum of Dolls was founded by the Preili artist and museum owner Jelena Mihailova, who has been making dolls since 2007. The museum houses hundreds of dolls and the exhibits are constantly changing. The dolls are remarkably lifelike; visitors will see dolls laughing, crying, flirting, and even dreaming. The NSLI-Y students learned about Mihailova, her artistic process, and the museum. Mihailova also designs costumes, and each student was able to dress up and take pictures in one of the nearly 400 spectacularly designed outfits. 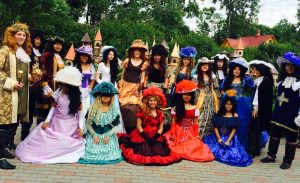 NSLI-Y students in Latvia visited Aglona, a small Latvian village about 40 kilometers northeast of Daugavpils. Aglona is famous for its Basilica of the Assumption, Latvia’s largest and most important Catholic Church. Each year, the church attracts hundreds of thousands of pilgrims who come to see the miraculous Aglona Mother of God icon. Students were able to walk around the church, learn about Catholicism in Latvia, and stand before the historic icon of the Virgin Mary. The group also stopped at Devil’s Lake, a picturesque little lake tucked away in the Latvian pine forests. Students learned that the water is only 20 meters deep; however, below the water sits approximately 140 meters of soft clay through which methane gas escapes. In the winter, this gas has been known to catch fire as it reaches the lake’s surface. 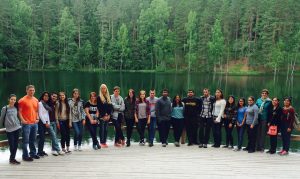 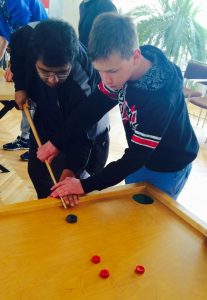 NSLI-Y summer 2015 Russian language students in Daugavpils, Latvia had the opportunity to learn fencing with the Latvian national fencing team. Participants went to the Olympic Sports Center with their Russian-language partners and were greeted by members of the Latvian national fencing team. Students were given a fencing demonstration in Russian before breaking off into pairs to try out what they learned. The local fencers were quite impressed by the energy with which the NSLI-Y participants battled each other. This proved to be a valuable opportunity for the students to practice learning new skills in Russian and may inspire several students to take up fencing in the future. 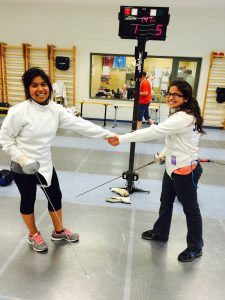 The Wisconsin State Journal featured an article by Professor David Bethea about the Pushkin Summer Institute, read it here!